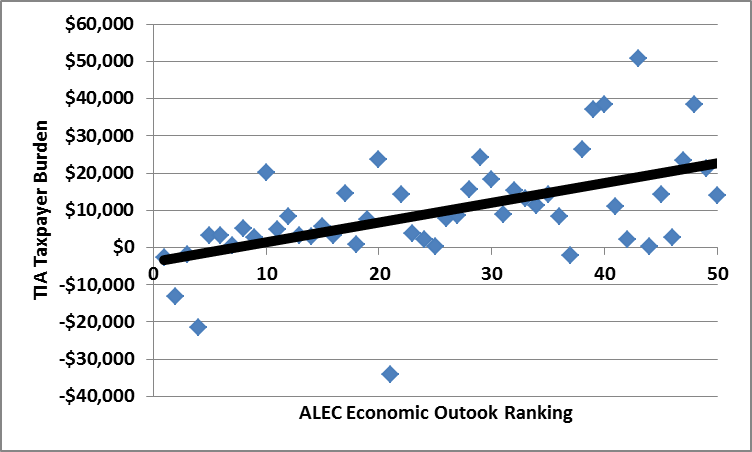 Last week, the American Legislative Exchange Council (ALEC) held its 40th annual meeting in Chicago.  The event drew over 1,000 attendees from most of the states around the nation, along with well-organized street protests.  The ALEC meetings have long emphasized the development of free market-oriented policies that have proven attractive to many people, and threatening to many others.

ALEC leaders have developed a framework for rating the states on economic competiveness, producing in turn an Economic Outlook Ranking that Truth in Accounting (TIA) includes on State Data Lab.  The 15 factors on which this ranking relies include tax rates and tax burdens, tax policy changes, government debt service, the state’s legal climate, labor market policies, and the share of government employees in total state employment.

The chart above relates the latest ALEC Economic Outlook Ranking to the latest Truth in Accounting (TIA) “Taxpayer Burden” estimate.   TIA’s Taxpayer Burden provides a comprehensive measure of state government fiscal conditions, including on-balance sheet liabilities as well as difficult-to-find obligations and other factors that government accounting standards have long left buried deep in the footnotes or underlying actuarial reports.   These future obligations are then offset against assets available to pay bills, with the net result compared across states based on the number of taxpayers filing returns.

The past is not the future, of course, and a wider range of factors than state government fiscal conditions can drive economic growth; but holding those other factors constant, it will be interesting and useful to learn from the relationships among the ALEC Economic Outlook Ranking, the TIA Taxpayer Burden, and developments in state economic growth and government financial conditions.  In coming weeks, TIA expects to have final estimates for the TIA Taxpayer Burden for 2012 for all 50 states.  These estimates will be relatively timely in light of the long lag in waiting for state government financial reports, and they will provide information supplementing some of the dated information on which the ALEC Economic Outlook ranking relies.