Behind Pensions -- Another Elephant in the Room 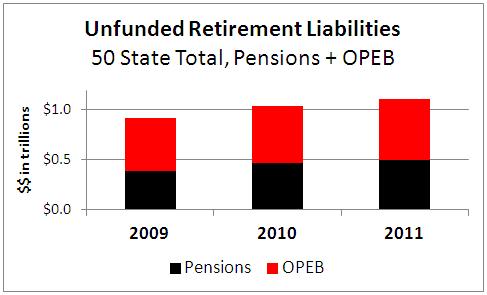 State government unfunded retirement liabilities have risen in recent years despite an improving investment climate. For the 50 states, total unfunded obligations topped $1 trillion in 2010, and rose a further 6% in 2011.

Massive state pension obligations have attracted growing public attention; perhaps surprisingly, they are less than half the story.  States have also made significant promises for other retirement benefits, mainly in health care services.  Across the 50 states, Truth in Accounting (TIA) estimates indicate these “Other Post Employment Benefits” (OPEB) actually exceed pension obligations.  In 2011, TIA estimated the states had $500 billion in pension obligations and another $600 billion in OPEB.

In late April, the U.S. Government Accountability Office (GAO) released an updated report describing its views about the near-term and longer-term fiscal outlook for state and local governments.  Introducing the longer-term outlook, the GAO emphasized first and foremost that “the decline in the sector’s operating balance is primarily driven by the rising health related costs of state and local expenditures on Medicaid and the cost of health care compensation for state and local government employees and retirees.”  That GAO report is available here.

How do unfunded retirement liabilities in your state compare to other states?  You can look into this issue using the State Data and Comparison tool at our website.