How many guns does Texas have? 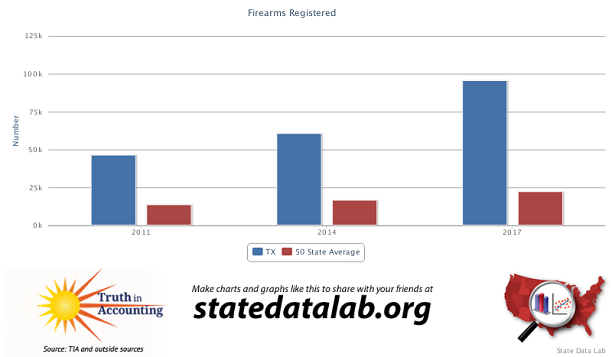 Answer: They have a lot. The lone star state had a total of 95,269 registered firearms in 2017 according to the U.S. Department of Justice. This figure comes from the total amount of registered machine guns, short barreled rifles, short barreled shotguns, and any other weapons. However, this estimate is suggested to be much higher due to the fact that Texans are not required by law to register their firearms.

Fun fact: In May of 2013, the Texas House approved a bill to dub May 4th as Gun Day, which allows college students to carry concealed firearms on college campuses. Another fun fact is that May 4th is also recognized as Star Wars Day, which would make for some pretty interesting cosplays at Texas universities!

Want to compare how many guns your state has? Not as many as Texas, but you can still make a chart using our State Data Lab!