How do state governments stack up on this score?   How timely do they report financial results?

State governments are large and complicated enterprises, too.  The 30 largest states (by revenue) collected a total of $2 trillion in revenue in their latest fiscal year.  But citizens, including bond investors, don’t learn about their annual results very quickly.  On average, the 30 largest states released audited annual financial reports 189 days, or over six months, after their last fiscal year ended.  In other words, larger state governments take nearly four times as long as the firms in the DJIA to inform the public about their overall financial results.

This just doesn’t cut the mustard. 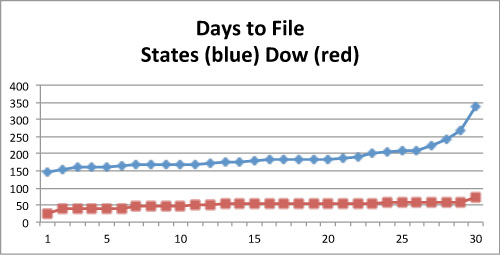 Here we are, in the first quarter of 2013, waiting to learn about what happened in the fourth quarter of calendar 2011.  Consider Illinois.  The State of Illinois didn’t release its June 30, 2011 fiscal year annual report until June 1, 2012, nearly a year after the previous year’s results were over.  By that time, the legislature was working on the budget for fiscal 2013.  Coincidentally, Illinois also carries the second highest taxpayer burden among the 50 states, as estimated by the Institute for Truth in Accounting.

Looking across the 50 states, the relationship between slow financial reporting and poor financial results isn’t perfect; for example, some of the states with high taxpayer burdens like New York and New Jersey also release their audited annual reports relatively quickly.  As a general rule, however, states in relatively poor financial condition tend to report those results later than sooner.

A lot of ink has been spilled in the forecasting business.  But one lesson experience provides is that we have a lot on our plate just trying to learn what happened in the last month or the last year -- in companies, in governments, and in economies.

Back in March 2011, the Government Accounting Standards Board (GASB) issued a research brief summarizing a staff study of the timeliness of state and local government financial reporting.  The report did not offer a firm conclusion or recommendation, but did note that the GASB ‘… does not establish benchmarks or standards for when GAAP-based [Generally Accepted Accounting Principles] financial reports should be issued.’

Back in the late 1980s, we learned a lesson about timely accounting.  The savings and loan crisis was blooming, and the cost of that lesson was trebled by accounting practices pushing back the day of reckoning, allowing, in Ed Kane’s words, the "zombie banks" to gamble for resurrection.

How many "zombie states" do we have today?