On the heels of credit rating upgrades, Illinois has sold $1.6 billion worth of bonds to fund a pension buyout program and construction projects. As the Chicago Tribune reported, Gov. J.B. Pritzker touted the upgrades lauding Democratic leaders for their work “to make sure that we’re back in good fiscal order, that the state is building its fiscal foundations for the road ahead.” But as Hetty Chang of Moody has stated, ratings are not “public policy report cards, although politicians may use them as such.” Credit ratings do not focus on the overall financial condition of the state; they focus on the likelihood of bonds being paid.

And if the state is in such “good fiscal order,” then why did it need to borrow money?

Moody’s upgrade announcement was in part based upon the state’s plan to put $1 billion “into its financial reserves, such as its ‘rainy day’ fund.” Fitch Ratings highlighted $1 billion is a “modest 2.2%” of budgeted expenses. Instead of borrowing the full $1.6 billion, why didn’t the state use this $1 billion so the taxpayers wouldn’t have to pay as much interest on money borrowed? 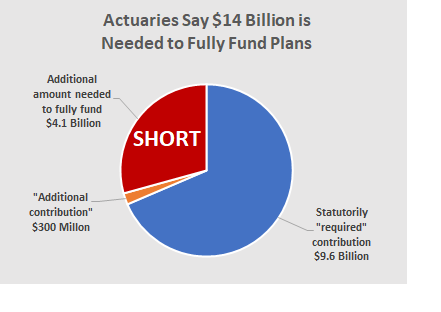 The upgrades were also due to the Governor’s plan to contribute an additional $500 million over two years into its pension plans on top of the “required” contributions. The “required” contribution refers to the statutorily required contribution established in 1994 during the Gov. Jim Edgar administration. This funding scheme is so flawed that in 2013, the Securities and Exchange Commission charged Illinois with securities fraud for “misleading municipal bond investors about the state’s approach to funding its pension obligations.” Former SEC Administrator Peter Chan described the plan as a “balloon mortgage on steroids.” For fiscal year 2022 the $9.6 billion “required contribution” plus the “additional” $300 million is still billions of dollars below the more than $14 billion that  the pension plans’ actuaries determined was needed to properly fund the plans.

The Tribune article also quoted Pritzker saying that the Democrats have passed “four balanced budgets in a row” without mentioning that these budgets have been balanced by borrowing money, transferring money from non-budgeted funds and shorting the pension plans by billions of dollars; and that decades of so-called balanced budgets have put the state more than $200 billion in debt when  unfunded pension liabilities are included..

Illinois citizens need to understand these truths before they go to the polls and to be knowledgeable participants in the state’s tax and spending policies.