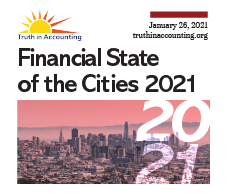 Includes “COVID-19 and the resulting economic downturn made a considerable impact in many areas of the U.S. economy during 2020, but most certainly in municipal budgets. … New York City claimed the dubious distinction of worst municipal finances in the U.S. for the fifth year in a row—and that was before the nation’s largest city became an early epicenter for the pandemic. … Chicago (second-worst in the nation), Truth in Accounting’s hometown, would need each taxpayer to pay $41,100. The average taxpayer burden across all 75 cities in the report works out to $7,355. “